BECOME A MEMBER OF HOLY FAMILY

To contribute to our parish through direct giving, fill out the form below and drop it in the collection basket or mail it to 299 Red Oak Drive, Aitkin, MN 56431.

Our Lady of Fatima Catholic Church 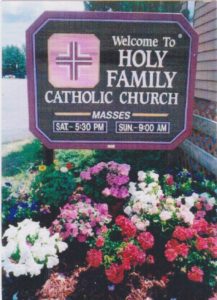 As early as 1873, Mass was offered in the Lakes Region which now constitutes Holy Family Parish. It was then that Francis Pierz, a pioneer missionary, offered Mass for the Sioux and Chippewa Indians. Until 1924, Holy Family was a mission church attached to St. James of Aitkin. Services were usually held about once a month on a weekday in private homes or in the public school. Mass was celebrated in the first log cabin in 1895.

A small group of people started raising funds to erect a church building. They received assistance in the amount of $500 from James J. Hill, president of North Pacific Railroad. In 1915, through the effort of Father Turbiaux and the pioneers, Holy Family was built. It was a wooden frame church on Maddy Street that later became Hoppy Drug Store. The parish itself was incorporated as a parish in 1938.

The priest from Deerwood had the McGregor parish as a mission before the Crosier Fathers from Onamia started ministering here in 1948. Father Buechler was the last priest from Deerwood who served in McGregor. Parishioners from McGregor would pick him up every Sunday morning for Mass and then take him back home to Deerwood. Since Father Buechler was in his 90’s and no longer capable of taking care of a parish and a mission, Bishop Welch entrusted the care of Holy Family to the Crosier Fathers of Onamia. Father Joseph Cain became the first Crosier to come to McGregor as a week-end pastor.

Father Richard John followed in 1950, and it was then that a new church was built (the present social hall).

In 1952, Father Cletus Herman became the pastor; and in 1955, work began on the present rectory and garage. Father Adrian Van Zutphen became the first resident pastor.

The influx of vacationers and tourists demanded an addition which would be used only during the vacation season. In late 1961, a new building program began and was finished in January 1962. Father Richard Klaver was then the pastor. For 20 years, it was used as a summer church until 1982.

In 1972, Father Clem Gustin came to McGregor; and, during his pastorate, most of the changes from the Second Vatican Council were implemented. This was the first time that Holy Family had a parish council.

Father Jerry Schik followed and during his stay at McGregor, the present church got a face lift with new cedar siding and a black ash-paneled interior. The west entrance was also constructed over the open stairway which gave the building a finished look.

Father Jude Verley became the next pastor; and it was during his stay (1983-1986), that extensive remodeling was done inside the present church. The old church became a social center, and the seating in the 1961 building was turned so that the altar is on the north side and the pews are in a fan shape so that the last pew is only nine rows away from the altar. We can seat 325 people in the pews and have room for 100 chairs.

Father John Fleischhacker came to McGregor in 1986. Remodeling was finished when handicapped bathrooms were installed where the sacristy used to be. The next project was to make our facility handicapped accessible. Many years of talking finally resulted in building a 48’ x 24’ addition on the south side of the church which includes a ramp, coat room and an open area with the baptistery. This area, which we call Narthex, also serves as an overflow area when there is no more seating inside the church. The present social hall also was totally remodeled. 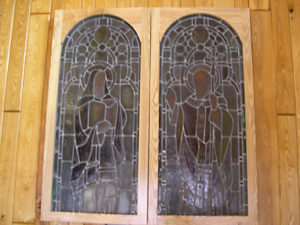 These two saints, together with St. Benedict, were proclaimed co-patrons of Europe by Pope John Paul II. They are blood brothers who were born in Greece and became apostles to the Slav nations of Moravia, Bohemia and Bulgaria. They could speak the language of these countries and, for example, they created a Slav alphabet and they translated the Bible into the Slav language (hence, the characters were called “Cyrillic”). They also were authorized to use the local language in the liturgies of the Church. Their feast is celebrated on February 14.

Since most members of our parish are of European decent, it seems fitting to have images of these great saints in our church.

These stained glass windows came from Our Lady of the Lakes Seminary in Wawasee, Indiana. This seminary was staffed and later owned by the Crosier Fathers and Brothers. The windows were in the chapel which was built in 1948. This seminary was turned into a prep school and finally closed in 1975. When the building was later sold, the Crosiers kept the stained glass windows.

In 2009, these windows were given to Holy Family Parish by the Crosier Fathers and Brothers in honor of the service of the Crosier pastors who served this parish for sixty years.

HISTORY OF OUR LADY OF FATIMA – MCGRATH 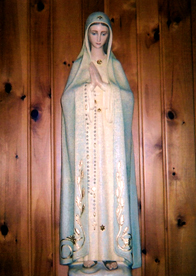 During the winter months, various Brothers, Sisters and Priests visited the logging camps around McGrath. James McGrath, who was a Catholic, gave his foremen orders to give them the best care. He had them hauled with his own horses from camp to camp.

In March of 1905, Father Buechler was summoned for sick call from Pine City. He came by train to Finlayson, then by buggy until it was impassable and then by horseback to Daugherty’s school. It was the first time he rode a horse and he asked to return by buggy. When Father Koerer came from Pine City in June of 1906, he didn’t like the trip either.

Father Wurm came from Aitkin for the summer of 1907.

Father Reiger came once a month by train. He rode the Flyer from Pine City to Moose Lake, staying there overnight, and then took the Soo Line to McGrath. Mass was held in the section house. At 5:00 the next morning, he returned to Pine City via the Soo Line and the Northern Pacific Flyer.

Our Lady of Fatima was first established by a group of railroad, lumber and farm families as St. Anthony Catholic Church. It was built in downtown McGrath (then a booming lumber town), by donations of lumber or $25 per family.

In 1911, before the church was finished, Most Rev. Bishop James McGolrick of Duluth, turned the McGrath parish over to two Crosier priests, Fr. William Van Dinter, OSC and Fr. John Van der Hulst, OSC. This made McGrath a mission of Wahkon, and Wahkon a mission of Onamia.

Between 1912 and 1927, Fr. Van der Hulst, OSC and Fr. John Klaver, OSC each spent a number of years taking turns as pastor of the McGrath parish. During this time, the St. Anthony Church building was completed and incorporated.

On September 16, 1924, the Most Rev. Bishop John T. McNicholas, Duluth, wrote to the Holy See for its “beneplacitum” to have the Crosier Fathers take charge permanently of Moose Lake, Barnum and McGrath parishes. He granted the faculties of the diocese to the designated priest or priests to take charge of these missions. He asked to have a priest named “parachus.” To name a priest “Parachur” ensured the validity of marriages.

On November 14, 1924, the Most Rev. Bishop McNicholas, with permission from the Holy See, Incult, Prot. 4673/24, entrusted permanently to the Crosiers Fathers the Church of St. Anthony, McGrath. Declaring “servatis de jure servandes” are, and are to remain under the jurisdiction of the Crosier Fathers “Ad Beneplacitum S. Sedis.”

McGrath pastors were paired with Wahkon in 1927, which was then the St. Cloud Diocese. Wahkon did not return to the Duluth Diocese jurisdiction until 1973. McGrath’s statistical reports and buildings, however, remained under the Duluth Diocese.

In 1928, McGrath and Wahkon parishes pooled money together (about $500) and bought Father Van Zutphen a car. He had no driving lessons and it was reported that he often had to be pulled out of ditches.

Rev. Aloysius Steines, OSC (1941 -1949) Rev. Steines moved from Onamia into the new Wahkon parsonage in 1942. Religious instructions were provided by the nuns during vacation for many years.

Two ladies each month served lunch for donations to raise money to help the church. The men had Booya fundraisers also.

By 1958, the old St. Anthony Church was beyond repair and needed to be replaced. In 1958, Fr. Schmitz appointed a building board consisting of Joseph Becker, Jr., Mike Schwarzbauer, Jr., John Leier, Arleigh Haas and Joseph Emmer.

In March 1958, he wrote a long letter to Most Rev. Bishop Thomas A. Welch, Duluth. In it he told of the village of McGrath, with its few homes, several small stores and a fine grade and high school, situated in southern Aitkin County. The small, un-repairable mission church built 48 years earlier served approximately 400 square miles with 30 Catholic families scattered amongst thousands of Protestants. A better location has been donated.

The estimated cost for a new 70 ft. x 40 ft. building was $25,000. The parishioners raised $8,000. They expected with a new church (with a basement in which to hold socials), they would be able to raise another $7,000. Fr. Schmitz, asked for permission to request $10,000 from the Catholic Church Extension Society in Chicago.

The donation was asked for and then granted on July 21, 1958. The name of the church was changed to Our Lady of Fatima at the request of the donor, Jerome G. Baldesberger of Pittsburgh, PA, who donated $10,000 (through the Catholic Aide Society).

John Zimple donated the land. Taylor and Sons Construction hauled 250 yards of gravel. Latterell Will Drilling Co. of St. Cloud drilled a well, 80’ deep with 64’ of water. Ground was broken on July 20 by the Crosier Provincial, R. Mischke, Prior of Onamia, Rev. Kapphahn, Vicar, and Fr. Schmitz. Simonson Brothers dug the basement. The contractor was Louis Gottweld from Pierz, MN.

The church was completed December 18, 1958. The final cost was just over $27,000. The first Mass was said at Midnight, December 25, 1958 by Fr. Schmitz. The dedication and blessings were administered July 19, 1959 by Most Rev. Lawrence Glenn, the Auxiliary Bishop of Duluth. A class of 12 children was confirmed on that same day. The donor, Jerome G. Baldesberger and his daughter Mary were also in attendance

In 1985, Most Rev. Bishop Robert Brom, Duluth, terminated the parish corporate status for Our Lady of Fatima and placed it as a chapel within the parish corporation of Holy Family parish, McGregor. It was an effortless and natural transition since all of the formal paperwork, except for the cemetery records, were already managed and stored at McGregor. McGrath has one or more representatives on both the pastoral and financial councils

For a short time, the two Schwarzbauer girls were serving Mass for Fr. Verley – that is until he was told by the Bishop that girls were not allowed to serve Mass. Girls are now allowed.

Rev. John Fleischhacker, OSC served as pastor from 1986-2009. Prior this appointment, Father John served 19 years as a missionary in New Guinea and 2 years at Holy Angels Catholic Church in Moose Lake.

Under Fr. Fleischhacker’s direction, the church was painted again, the furnace was replaced, the sound system was updated and the communion railing was removed to make more room for the musicians. The basement social hall and kitchen were remodeled. The church land was surveyed and a fence was put up on the North and West property lines.

Pat Schwarzbauer and George Olson, a funeral director, requested bounding the cemetery and locating and mapping the graves. A fence was then erected enclosing the cemetery.

We have been blessed with 361 Baptisms, 183 First Communions, 168 Confirmations and 84 Marriages. There have been 95 funerals here and 72 burials in our cemetery.

One parishioner, Jerome Schwarzbauer, was ordained a deacon for the St. Cloud Diocese.

Rev. Dr. Paul Fruth was assigned to the McGrath parish in August 2009. In January 2010, the local fourth degree Knights of Columbus assembled here to renew their vows and in May 2010, we had our first annual Memorial Day Mass in the cemetery.

Rev. David Forsman was assigned to the McGrath parish July 11, 2018.